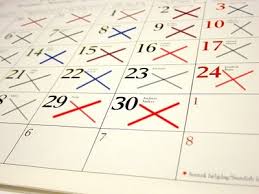 Consistent action is the key to lasting change.

I learned this lesson (again) recently. A few months ago, I signed up for a program that teaches you how to use bodywork and alignment to improve your mobility and reduce stiffness and soreness.  (Ah, the joys of middle age.)

What attracted me to the program (other than the promise of relief) was the bite-size commitment required. Just ten minutes a day, five days a week. But a couple of months in, I realized that I was only doing the exercises once or twice a week.

Obviously, it wasn’t that I didn’t have enough time for a ten minute session. I think, sub-consciously, I didn’t quite believe that ten minutes a day could really make a difference. So I just wasn’t making it a priority.

Once I recognized what was going on in my brain, I got serious about my daily ten minutes. And after several weeks of consistent practice, I can’t believe the difference it’s made.

It was humbling to have to learn this lesson (again) because it’s something that we are constantly coaching our Weighless members on.

When you join the year-long Weighless program, we don’t require you to change everything about your life on Day 1. Instead, we start from wherever you are and begin making small shifts that move you steadily–and sustainably–toward your goal.

Sometimes, our members struggle with consistency. Not because anything we’ve suggested is too difficult. But because at first, it’s hard for them to believe that small actions can ever add up to big results.  Until they do.

This week, see if you can identify one small action that you could take every day that would move you a bit closer to your goal.  Make it small and commit to being consistent. Let’s see what kind of compound interest we can earn by January 1st.

What will your small action be?

This site uses Akismet to reduce spam. Learn how your comment data is processed.

Find the Change Academy podcast wherever you get your audio.